Some projects using the Poppy platform shall need the use of speech recognition and/or text-to-speech techniques.
This topic aims at listing the possibilities. It is a wiki: everyone can contribute and edit THIS first post.
Also, users who have tested some of them are welcome to provide feedback.

(post withdrawn by author, will be automatically deleted in 24 hours unless flagged)

I don’t think Julius was a good idea. Did you really look at it? It’s designed around Japanese, and so in depth, I think that’s a bad idea. Our Syntax, and Japanese syntax are so different, if you read it, they already know it’s a fussy monster and the problem not being solved for recognizing English.

It’s just do to the single board processors, this thing built around that it has to retain zero dependencies on windows. The single board computers like the Raspberry Pi and Banana Pi, really don’t run Windows. I’m looking at all of the different versions of operating systems that are required, and DROID, has the only real visual recognition suites that work on Linux. It looks like you’ll have to write some part of AI, in Python, or it won’t consolidate all of these sensors and motors, let alone microphones and speakers.

This is one of the lists, I have to go through this huge list of web sites to find the Software. The repository really has almost everything. You still have go all the way through system requirements before you really pick. Do you really want to worry about your robot not talking because, Google only wants to link input and output, never give you a true speech to text engine. They want you tied to their servers. If Google is hacked, or there’s power outage in your area, do you want your robot to wind up speechless? That’s the real problem, if everything from microphone hit’s a dead end being sent to Google, and Google’s not home, you’re robot’s technically deaf, and not responding vocally. I find a few good ones but, then, some how it has to ported to the DROID operating system, where there is a Visual Recognition Suite for the single board computer like the one already in it’s head.

An interesting link that @Steve just sent me :

It allows to generate text sentences to describe images using deep learning techniques and is open-source. You can try it directly using the the web interface.

Could we imagine using it with the Poppy camera and a text-2-speech software, such that the robot can speak about what it sees in front of it? As the source code is available, one can also imagine using in a “developmental” way in an online learning fashion, but it is another story

Wow, this software is a genius !!! It can even guess things that are true and no normal human could guess; I made an experiment, submitting a photo with several Poppy creatures and other robots. Here is the result: 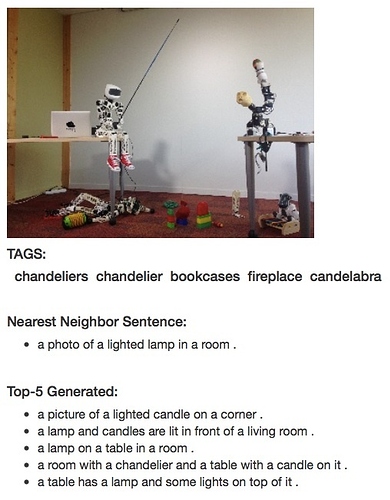 Now, why am I saying the software is a genius to say that these robots are lamps?

Because a very early experiment we made in the Flowers team was to build a set of robotic lamp-like creatures, which we called “Flowers Fields”:

It was the design which led us to the Ergo-Robot design, and the Ergo-Robot experiment in turn allowed us to learn a lot about creating DIY robots. And this learning has been very useful for the Poppy Humanoid …

I told you, this software is a magician

Hello,
as I am working on the voice from voxygen company which is not open source… I would be very interested to implement this topic into the poppy we have here in grenoble.
I keep you inform after our conference PAris le web

We were really impressed by the quality and speed of the speech recognition and TTS in french of the cherry project (https://www.youtube.com/watch?v=URB1kDDScfM). Do you know if they are open source and if they are the two mentioned in the wiki (Julius and and Mary tts) ?

You may directly ask to @Laura , @Sophie or @Maximilien

Thanks a lot, I will ask them.

Thanks for the enthousiasm regarding our project, I really appreciate it.
The video was done while using gTTS (see our wiki here).
You can have a look at the code here also. But you’ll have a specific link in the wiki for gTTS.

Thanks for this informations and yours great works on Cherry

I have added CMU Sphinx that you have used, to the original post of this feed.

In the video, do you know if it was CMU Sphinx or the google API for the speech recognition ?

Do you also think that problem will have important repercussions for the innovation and dependence of the french speaking countries ? Or it’s not so important ?

If yes, what can we do to avoid this problem ?
Contact and explain the stakes to the leaders of the projects that have used public funding or public research to invite them to make open source their french TTS & SR solutions, and find with them solutions in order that the release under open source licence can be interesting for them ? (Mbrola, Voxygen ?)
Try to make a crowdfunding / mutualisation between the public projects & public research & and open source projects that can have benefit about TTS & SR to improve the existing open source solution as Mary TTS ?
Contact some organism of the francophony ?
Other ideas ?

Mycroft : An Open Source Artificial Intelligence For Everyone https://www.kickstarter.com/projects/aiforeveryone/mycroft-an-open-source-artificial-intelligence-for/description Uses natural language to control Internet of Things. Built on Raspberry Pi this whole home A.I. plays media, controls lights & more.
There is also feedback about the STT in the FAQ, it’s maybe be interesting for Poppy projects ?

If they planned to use a deported solution for STT, they will probably use another proprietary solution, like the services offer by Google, or IBM Watson.
You could easily do the same thing.

If they planned to use a deported solution for STT, they will probably use another proprietary solution, like the services offer by Google, or IBM Watson.

Yes, certainly, lets’ see when they will publish the list of deported solution for STT if there is also other open source solution than Julius and CMU sphinx , it could be interesting to add it here.

I put here their text about this for the other readers of this tread :
"
We want to be transparent with our supporters, but at the same time
we need to keep some details of our project private until negotiations
are complete and contracts are signed. Remember that Kickstarter is not
a store. It is a place to build support and access capital to complete
amazing projects. Our platform is still more than 10 months away from
release and we have a lot of details to iron out before we ship.

We are currently evaluating several STT application interfaces
(APIs). Our software is designed to use multiple APIs simultaneously.
Partially this is to improve performance, but it is also to prevent
getting locked into a single technology or vendor. When we’ve selected
and executed agreements with our upstream STT providers we will
communicate our selection to end users.

We will also remain open to adding STT vendors in the future or bringing this portion of our technology in-house.

Mycroft is open source so users who don’t like our STT or AI selection can always deploy their own STT or AI back end.

@oudeyer I have discovered the presentation of this Mooc : https://www.france-universite-numerique-mooc.fr/courses/inria/41004/session01/about made by the Inria of Grenoble. Maybe contacting the author or asking them the authorisation to consult the forum of this Mooc will allow us to complete the first post wiki ?

This article http://www.objetconnecte.com/rentree-moocs/ seems to means that there will have a new session of this mooc.
If it’s right, it’s maybe an opportunity to contact the authors to think about how some activities asked to the students can enhance the use and common knowledge of the open source SR and TTS ? (example of an collaborative activity : participate to an collaborative benchamarking on the existing open source TTS solution in different languages using for example a common text (that will contain ? ! : numbers acronyms…) and putting the resulting audio file in a wiki ?)

Here lot of feedback about the possibility to use nice opensource solution of SR and TTS but without nice result :
http://blog.idleman.fr/raspberry-pi-09-creer-une-interface-vocale/

If someday someone find a nice open source solution he can also post it on this tread ( https://itechnofrance.wordpress.com/2013/02/04/donnez-de-la-voix-votre-raspberry/ ) they will be happy to use it. 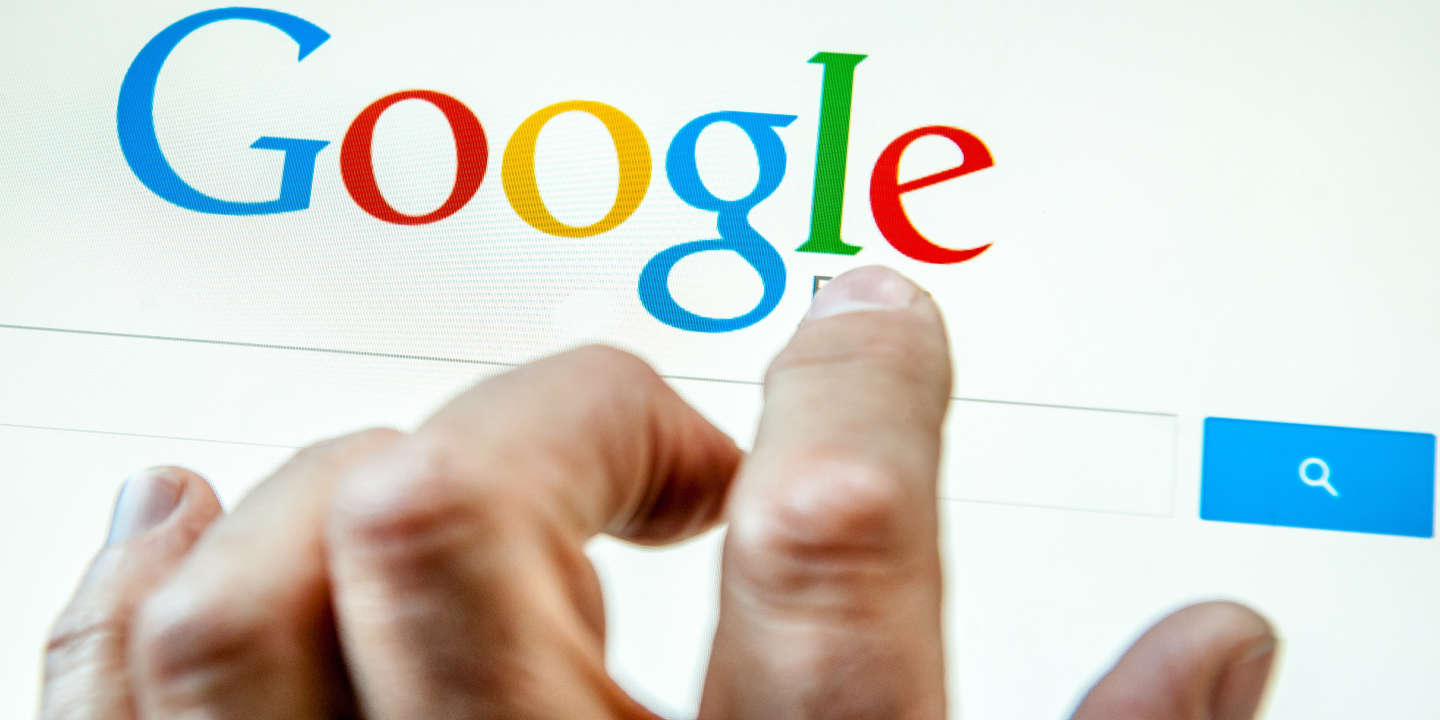 http://www.tensorflow.org/ is now under apache licence. We will be able to have a quality speech recognition in french without sending the data to google and/or to have a local installation of the SR that can be used without internet connexion ?

What do you think about ?

Thanks for the link. I do not understand very well. In the video, they say a lot about the speech recognition but regarding the examples, I do not see any think about speech recognition.
I have the read more in details.
But +1 for the fact all is in Python

Yes, i haven’t seen either real examples about SR

Which TTS or speech recognition could run on the Odroid? I was wondering whether MaryTTS for instance could run easily on such a small processor.
@Laura , @Sophie or @Maximilien, which systems have you tried? Why did you finally choose gTTS?