The Ergo-Robot experiment is an art/science project where robotic creatures, endowed with algorithmic models of curiosity-driven learning and language formation, were hacked by moviemaker David Lynch. The artist designed a head for the robots, as well as toys they could play with and an environment.

This experiment allowed to prototype some of the building blocks of the Poppy platform, especially the use of 3D printing and the shape of a robotic creature that is now called Poppy Ergo. 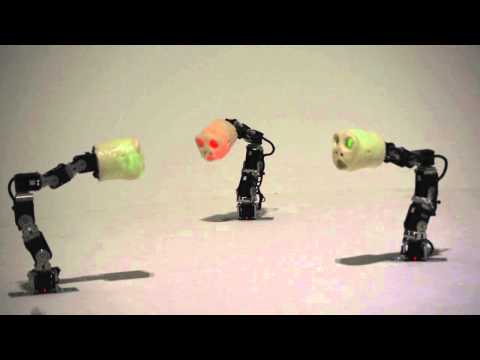 The experiment features a big egg that has just opened, where a tribe of young robotic creatures evolves and explores its environment, wreathed by a large zero that symbolizes the “origin.” Beyond their innate capabilities, they are outfitted with mechanisms that allow them to learn new skills and invent their own language. Endowed with artificial curiosity, they explore objects around them, as well as the effect their vocalizations produce on humans. Human, also curious to see what these creatures can do, react with their own gestures, creating a loop of interaction which progressively self-organizes into a new communication system established between man and ergo-robots.

Ergo-Robots: Artificial Curiosity and Language is an installation and experiment presented in the exhibition Mathematics: A Beautiful Elsewhere, from 21st october 2011 to 18th march 2012, in Fondation Cartier pour l’Art Contemporain, Paris, France.

It was developped through a collaboration between Inria Flowers team, Labri/Univ. Bordeaux I, and artist David Lynch.

Within the Poppy platform, the Poppy Ergo creature reuses the shape of these Ergo-Robots and models of curiosity-driven learning are accessible through the open-source Explauto Python library.
They are ready to be hacked again