Halley, a robot inspired by the Poppy Project

I’ve been exploring around the entire project site for Poppy and was truly inspired. I really wanted to build one, but unfortunately, as affordable as Poppy was, I simply did not have the budget. Despite this, I set about designing a 2.6-ft laser cut humanoid robot with high-torque metal gear RC servos and an Android phone for a face. The total cost was roughly 500-800 USD. My project, titled Halley: Ambassador Robot 001, was heavily inspired by the Poppy project, and has many similarities.

I thought the Poppy community might be interested (especially for the people who wish to build a Poppy but do not have the funds, just like me), so I’ve written a full Instructable documenting how to build my laser-cut robot: http://www.instructables.com/id/Halley-Ambassador-Robot-001/

I hope you like my work and any feedback is highly appreciated!

There are a LOT of very good features in your robot !
Especially, I like the very low cost design, the unity interface, the arduino electronic.

I would be so happy to somehow merge contributions from both side.

Is your robot open source ? Do you have a GitHub repository ?

Thanks for the feedback!

I open sourced the design and software files under the GNU General Public License.

Here is the GitHub repository:
https://github.com/johnchoi313/Halley-Ambassador-Robot-001

I would love for my project to be merged with the official Poppy contributions.

Amazing robot! It seems to be affordable for anyone. That really a good work!
Thank’s to share it with us!

Of course! Glad you liked this project

Which software did you use for the CAD design ?

Rhino3D for the CAD.
https://www.rhino3d.com/

Do you have any way to export the complete 3D model so I can open it with solidworks ? Maybe export as a STEP file ?

Aha, a short oversight I made. I have now exported the main CAD file as “Halley_Robot” in obj, stl, and stp formats.

They should be located here: 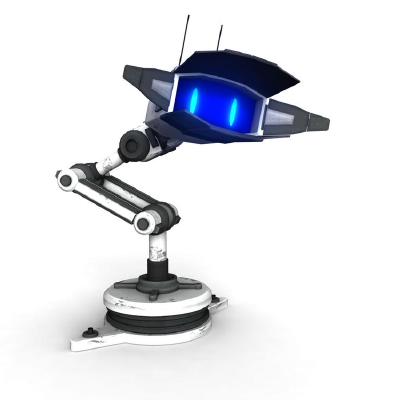 Halley-Ambassador-Robot-001 - A 2.6-ft humanoid robot for use in animation research.

This job is amazing! I am actually also building my own humanoid robot just like Poppy while I do not have much funds. Your work shows me correct direction I am gonna go!

You are building a humanoid robot too? I’d love to see where it goes! If you’re following my Instructable, feel free to ask if you have any questions or get stuck.

Yes, I have a page (http://zlethic.com/red-lab/) for updating the progress of this project (it’s started only two or three weeks ago).

I am using Odroid U3 and Odroid U3 shield as the controller, and a humanoid robot kit which is about 40cm tall as the body (I bought this kit from the Internet because I don’t have a 3D printer nor laser cut in my lab). And I am using 19 servo motors (TowerPro MG946R) which are at the same price as yours.

No, recalibration is not necessary, though you do need to attach the servos in the correct position the first time during construction. These kind of servos do have feedback, but it is only internal within the servo itself - it does not tell the microcontroller anything.

Gotcha! This information is helpful. Thanks!

There are already humanoid robots available in this price range that walk. See here: http://futureware.tictail.com/product/ready-to-use-raspberry-piarduino-humanoid-robot

Yes, I’ve seen that one before. That robot’s name is “Rapiro”. A very good design I must say. The biggest differences between my robot and Rapiro is pretty much the Android phone face and the fact that my robot is 2.6 ft tall. Thanks for the info, though!

I have been trying to make a lower cost version of the poppy using an ssc 32 board from lynxmotion and arduino uno with the possibility of an android phone for sensors and vision voice recognition it’s an ambitious project.

I know very little about robotics beyond basic 2 wheeled balance bot type robots. I saw on instructables.com that you have coding for the upper body but nothing yet for the lower half. Have you finished and released the completed code for walking? I’m horrible with code it still hasn’t clicked yet where I completely understand it all. I liked that the poppy was virtually plug and play until I saw the price of the servos o.O

Also I have made an adaptor for using RC servos in the poppy robot chassis which has really helped getting the frame built. I have a link in one of my posts on the forum.

Great project thank you for contributing to the robot community.

Good to hear from you!
I initially designed the Halley robot to be able to walk, but I quickly realized the servos would be too weak and unstable for bipedal walking, or even balancing. If you follow my Instructables step by step, you should have a fairly good idea on what it would take to make the legs move, but some serious redesign would be needed to get it strong enough to walk. That being said, I am currently working on a bigger and better version capable of navigating a room, and I’ll let you know when I have finished it

I’m just waiting on a powered usb otg cable I ordered for my s4. I’m using an uno to run the code and am hoping to just add in a few lines of code to connect via usb. I’m using the uart(RX/TX) port to control a lynxmotion ssc 32 board. Looking through your code it doesn’t seem like too difficult a program to add. Couple of extra libraries for the ssc 32 board and fingers crossed all shall be well.

Also I found an 18kg/cm motor on hobbyking.com I’m hoping to upgrade to and get things going. I’m thinking of putting tracks on the feet of my robot to help it move over flat ground as I only require the legs for climbing stairs and navigating over large obstacles.

Hm, rolling tracks to supplement the feet is an interesting idea.
If you have a build progress going, could you post some pics? I’d love to see it.