And S3 screws are to fix in whixh part?

You will need S screws for:

Ordering the bioloid bolt pack is more simple and some kind of screws set are not useful for building Poppy.
S3 can be use if you have not enough S2

Hi,
We are trying to control the MX-28 motors but when we are reading the port we have to specify the baudrate (57600) : “dxl_io = pypot.dynamixel.DxlIO(port,baudrate_MX_28)“
otherwise it’s impossible to get the id (scan method fails). Then we make the configuration file .json, but it cannot communicate with the motor :” DxlError: Could not find the motors (1,) on bus COM3.” We think it’s also because the baudrate is not specified but when we looked in the pypot doc we didn’t find a way to specify it in the configuration file… Could you help us?
PS: it works perfectly with AX-12A motors.

OK so to answer I need more information

Could you indicate us which screw is where ? We have some difficulties attributing screw…

We are using Windows, we are using USB2Dynamixel (dongle usb-ttl) and both commands are working.

To attach a motor to a 3D printed part, you have to put M2.5 nuts the motor: 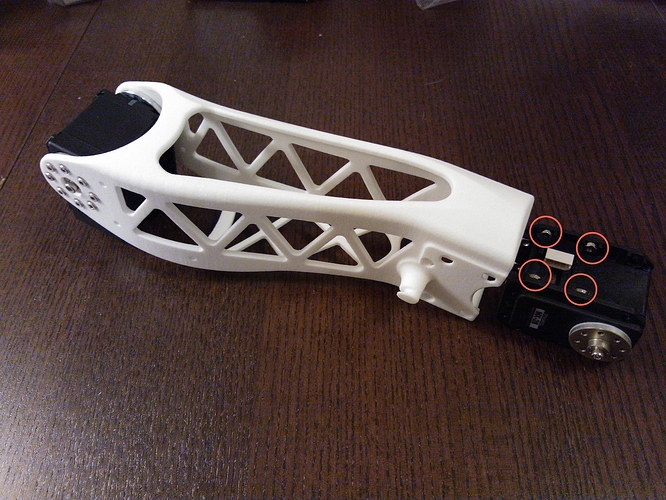 To tune these parameters you can use the Dynamixel Wizard (windows) or Herborist (Unix/Windows).RoboPlus v1.1.1.0

If you are using USB2AX dongles under windows, you will need to install it manually using the USB2AX.inf (2 KB) file. For more info about the installation procedure, please consult the QuickStart guide.

When you have installed the RoboPlus software, look for the Dynamixel Wizard. Take each motor one by one and give them an unique ID and set the baudrate to 1Mbaud as explained here:

You have 3 parameters to tune:

Thank you, You are downloading the software, 1 hour left :).
We will try tomorrow. By the way could you give us your configuration file for the whole robot.

Ok so here is an alternative using only pypot to set baudrate to 1Mbaud:

The configuration file for the whole robot can be found on the poppy-software repository.
First you need to install it. The best option would be to clone the repository but it is fine if you just download the last version.

Once you have the poppy-software folder, move it where you want and then install it.
Open a console:

Then have just to run the poppy_config_generator.py script after replacing your COM port:

It will generate a .json file with the configuration of the whole robot. After that you will able to use it as follow:

Jour 1 :
We had some difficulties in assembling motors horn, and assigning screws, but we succeded in building arms, legs, feet and head… 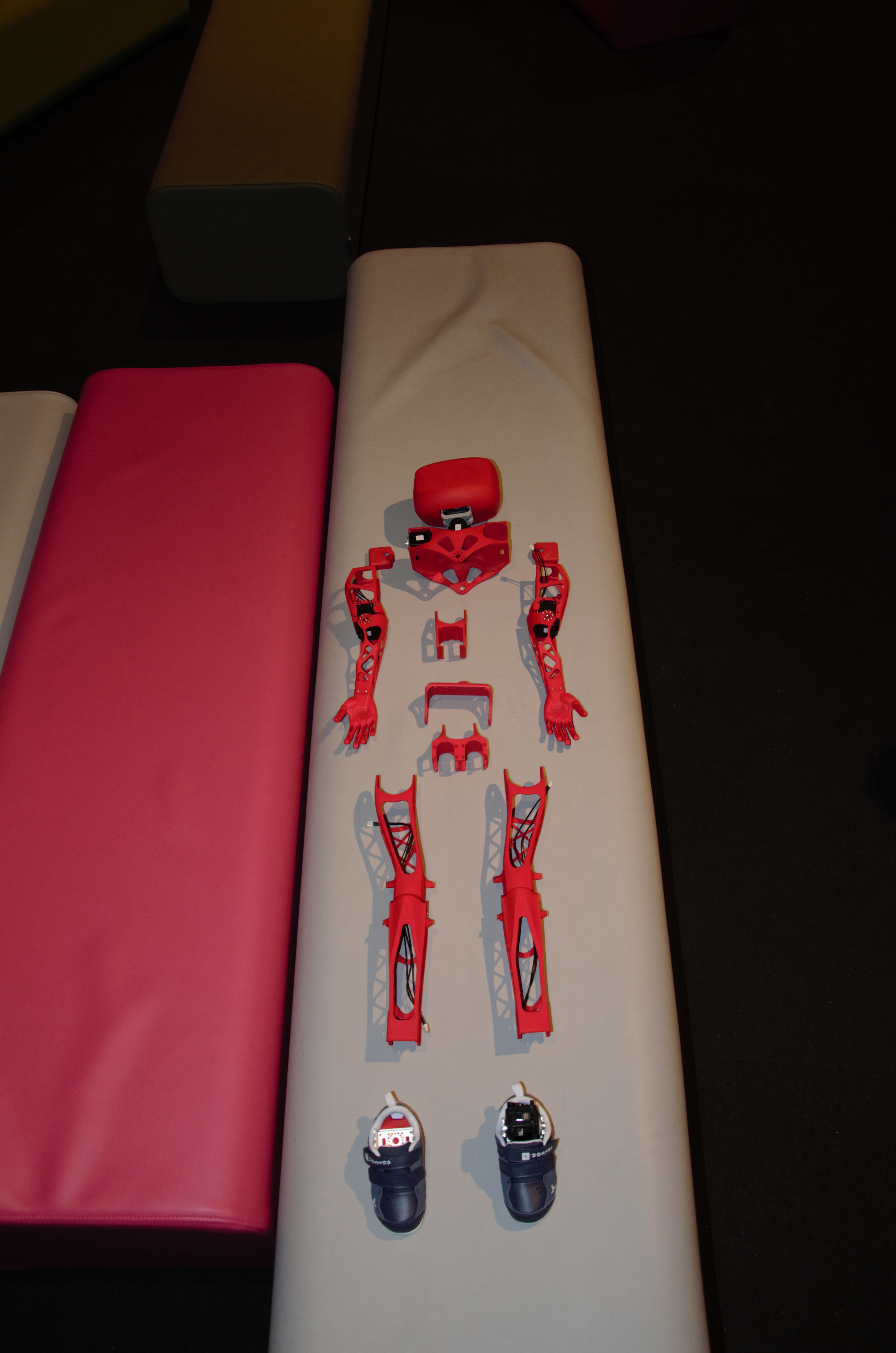 Ok so I just put the instruction for the trunk and I am taking picture to explain how to wire the robot.

Hop here is the connection instruction for the hip:

And an other one with a general view of the connections:

[image] [image] [image] Head In the head you will have an Usb HUB 4 ports where you will plug the 2 USB2AX. The USB2AX for the upper body bus should be plug to the head_y (AX12) motor. Then the head_y is plugged to the Bioloid 3P Extension board. The USB2AX for the lower body will be plug to the SMPS2Dynamixel located at the back of the abdomen. Upper Body For the upper body TTL Bus, the following wires are connected to the Bioloid 3P Extension Board located on the neck: l_shoulder_y r…

I saw you are close to the end:

Can you post some HD pictures for me to control if everything is fine before you plug the robot ?

this is quite the end…

poppy is finished!!
We are now hopping that it is well built… 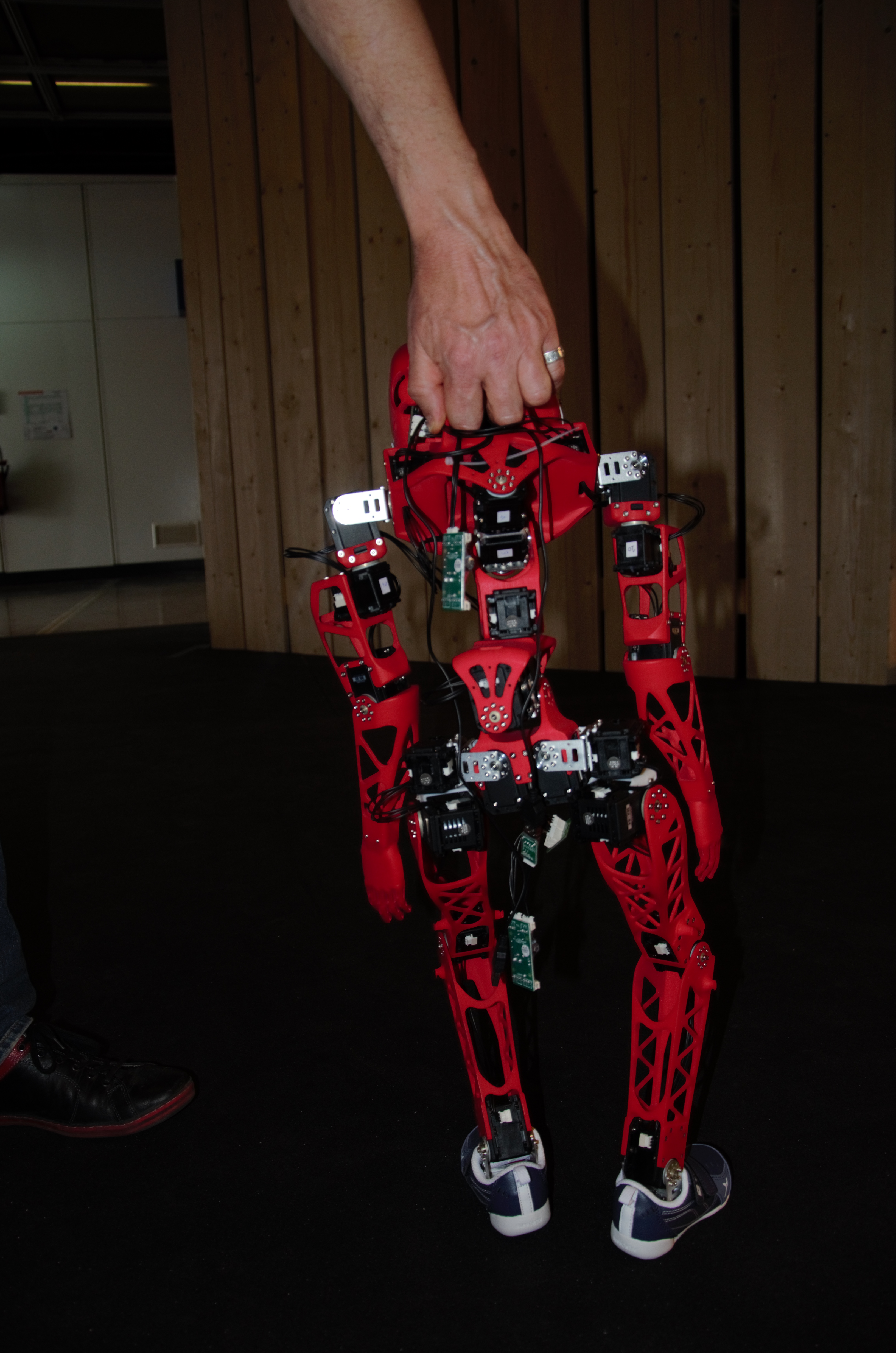 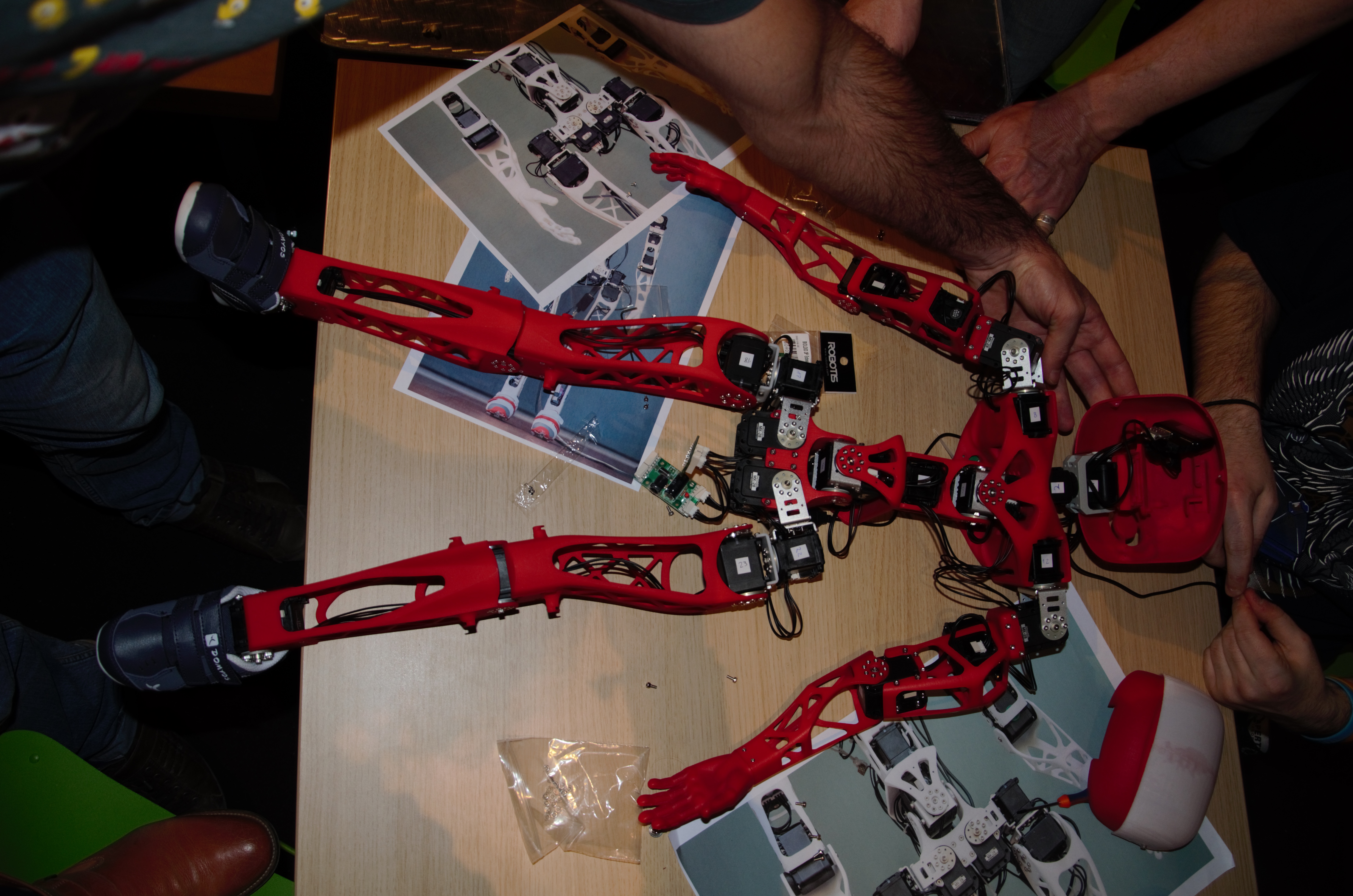 From these picture, I only see one problem on the arms: 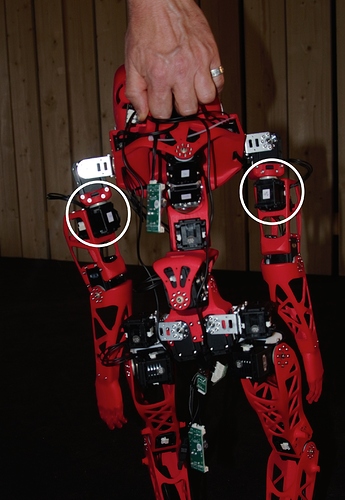 problem_bras.jpg1995×2887 1.64 MB
You can compare with the 3D view of the upper_limb.SLDASM. Yet it will not cause problem to make the robot move, so you can postpone this correction.

Maybe you will have issues with the zero position of the shoulder motors. The right one seems Ok but I cannot see well the left one. 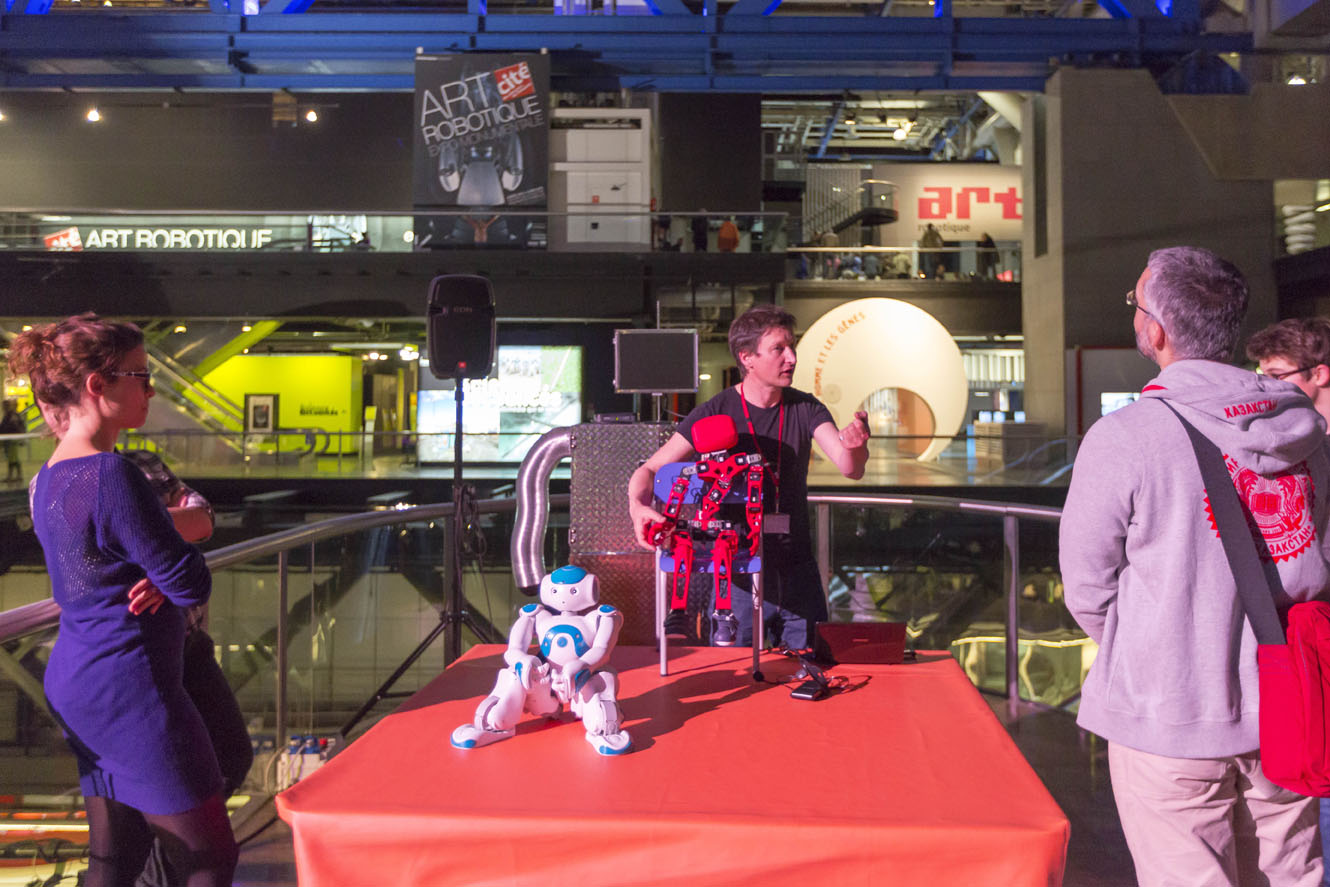 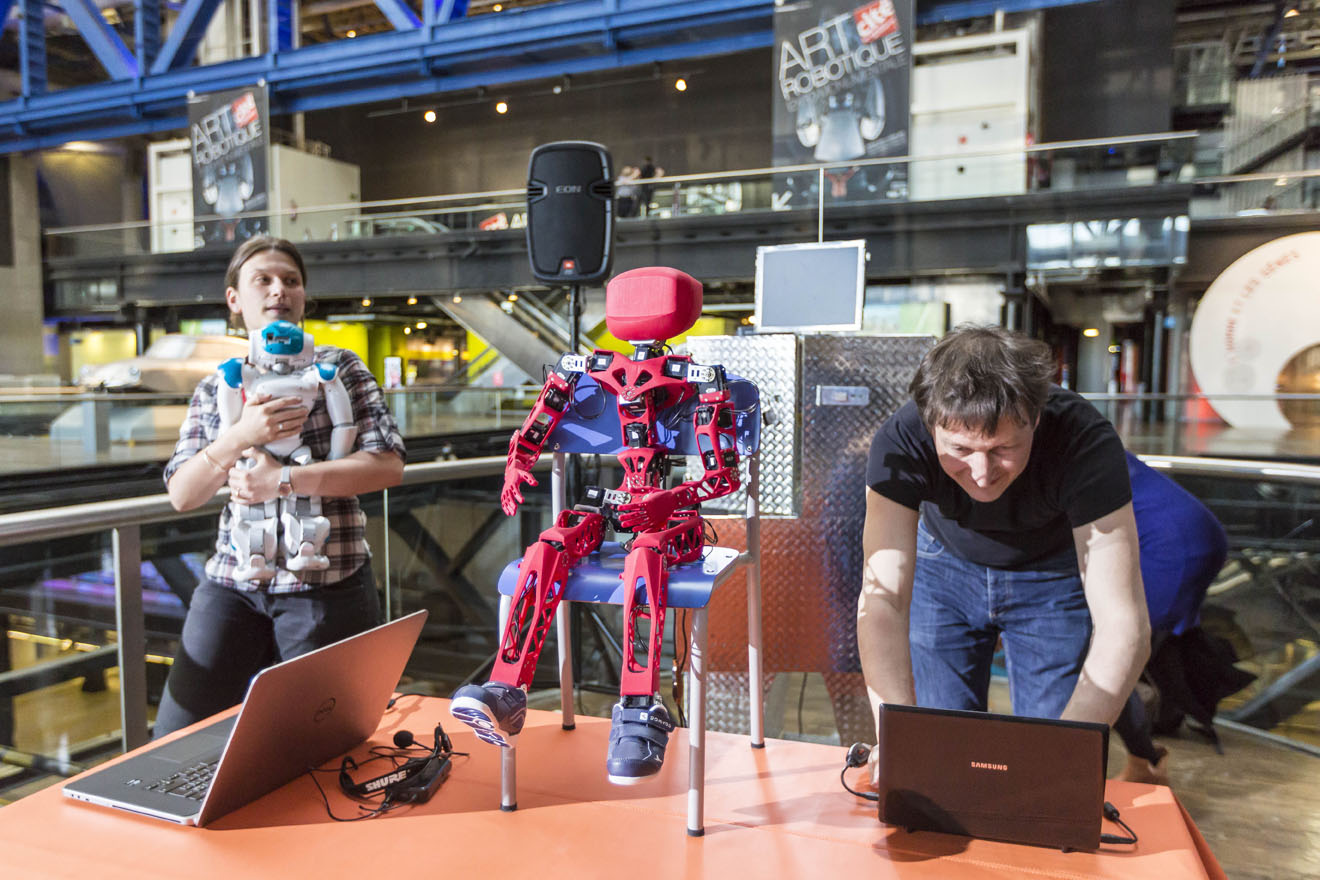 Poppy team was proud to prensent it to visitors, who shew great interest.

For the moment, one of knee motors of poppy is dead, so Poppy can just move higher part of his body. But it will be soon repaired!

Some results of Poppy week end at La cité des sciences : 21 participants (aged from 23 to 46) with various backgrounds (informatics, lectronics, physics, sociology, mecanics, architecture) had come to build Poppy, developing python use of Poppy, thinking about use of Poppy. 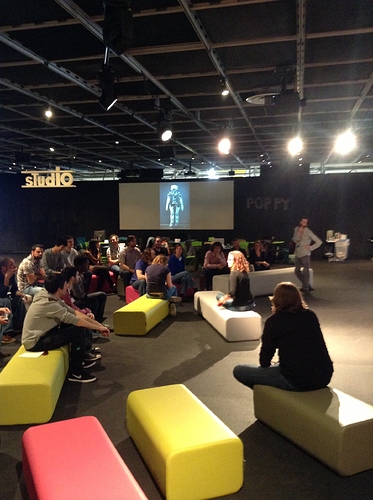 Near to 100 visitors came to visit the workshop, and we explained them Poppy history and workshop goal.

One idea that came from poppy week end from two young students : 3D printing of an ankle that could give some articulated movement to Poppy’s feet. 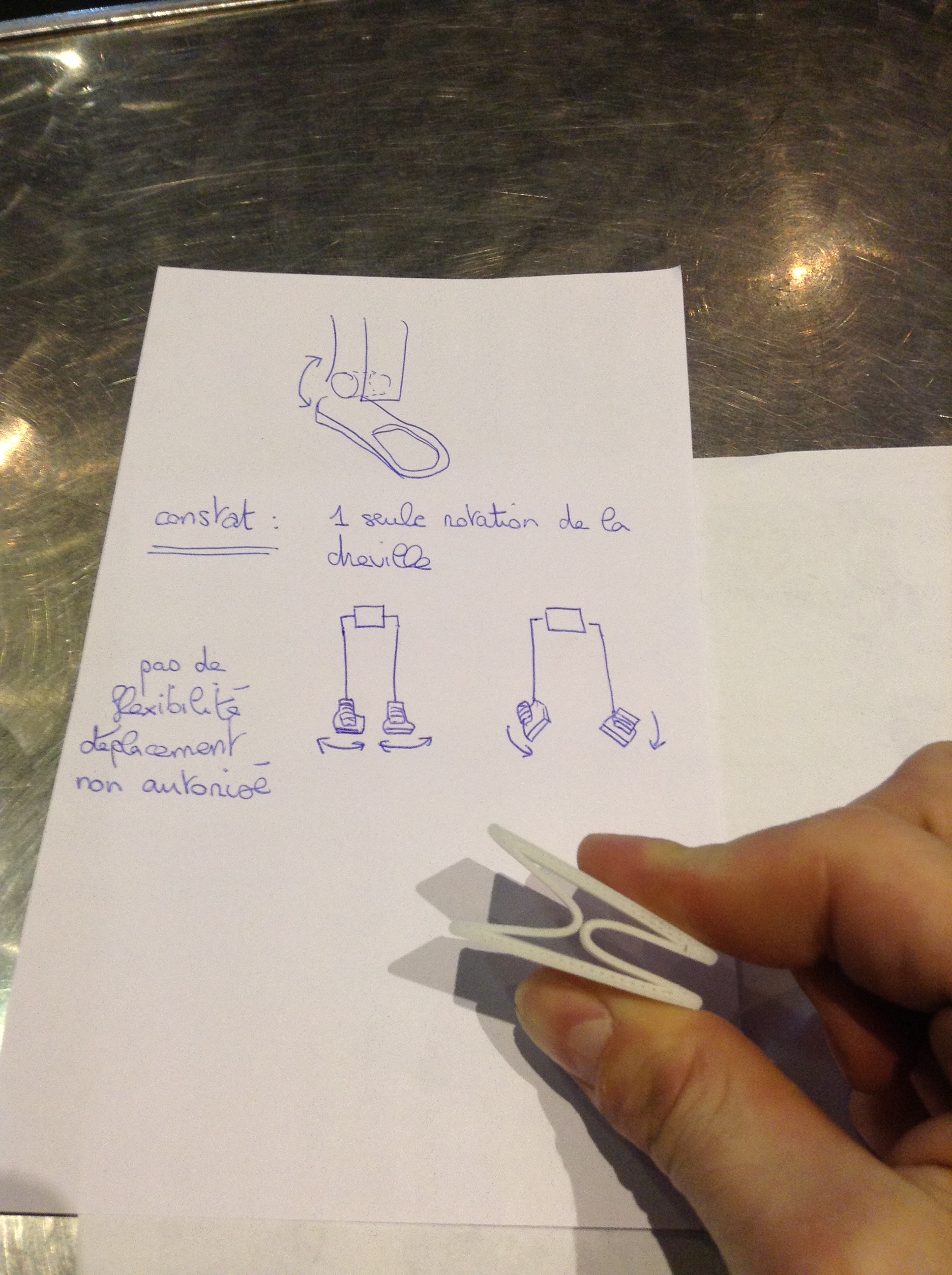 Participants were very pleased of having participated of Poppy birth, and many of them want to come again to go on working on Poppy project! 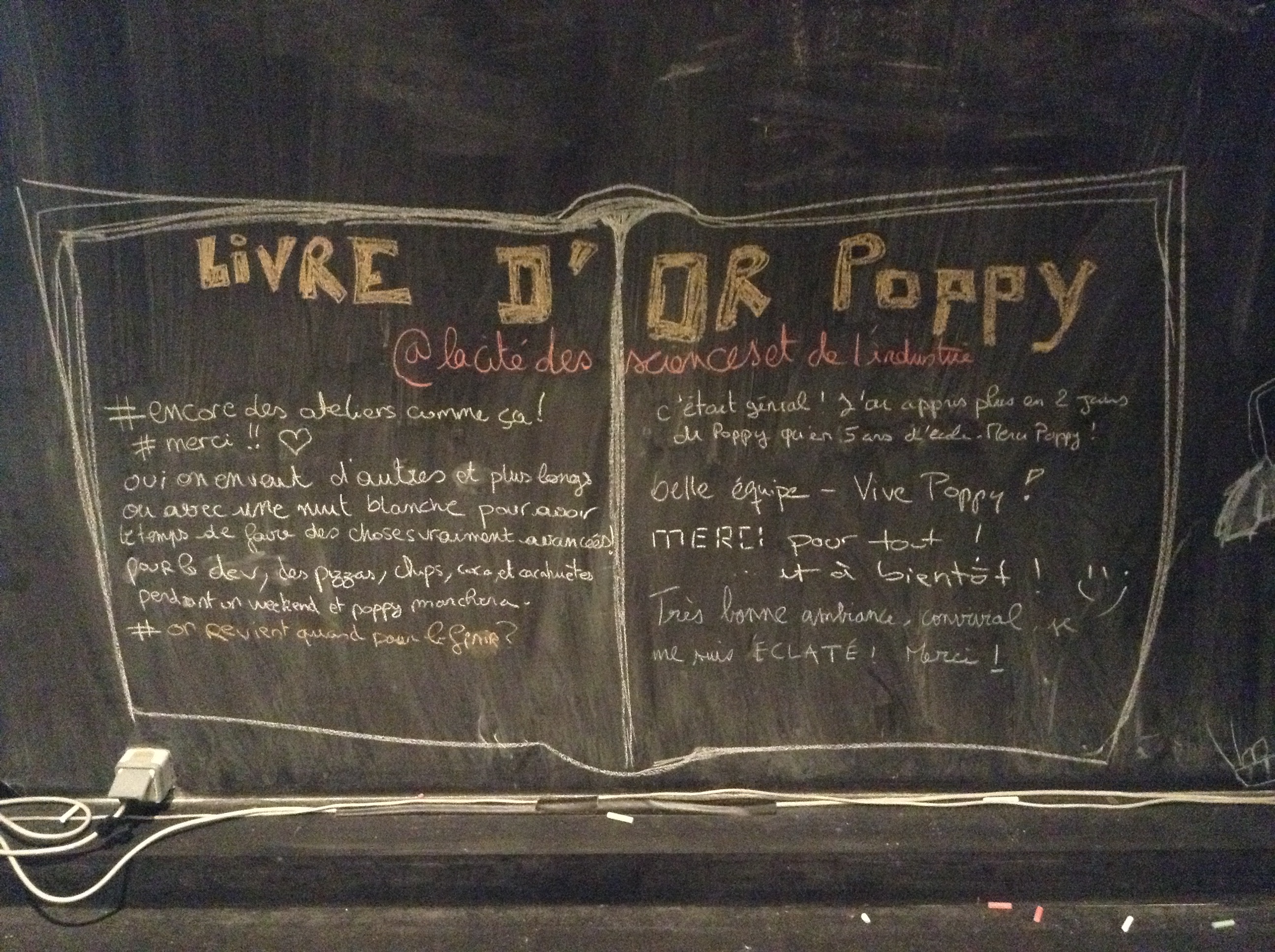